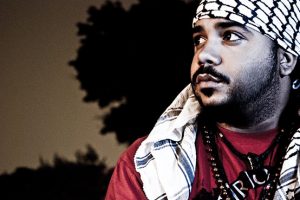 We sat down with Estee Nack, a veteran Boston MC who is making some of the best music of his career and is having a lot of fun while doing it. His music has been played on the show since we started, as he is featured on Vinyl Villain-produced bangers.

He has released music at a torrid pace since dropping the stellar ‘Triple Black Diamonds’ with Al Divino last year, with no signs of slowing up anytime soon. Winter ’17 brought the MiniMansionDust EP series, with 2 volumes almost entirely produced by the mysterious-yet-amazing Mr. Rose. It featured Daniel Son, Recognize Ali, JuneLyfe and Rosati among others. March brought us the ‘Hispaniola Saga’ with Tragic Allies bandmate Paranom, and just last week he dropped ‘La Tripleta’ with Paranom and Haze. At press time we are patiently waiting for his collab album with super producer Sadhu Gold ‘Surfing on Gold’. Check out ‘Differences’ on soundcloud and be sure to cop that. It could very well end up being a top 5 album of ’18

We spoke about a number of topics, including the roots of Tragic Allies, longevity in the  game, and approaching collabs with artists a decade younger (Al, among others) and over a decade older (the legendary Tragedy Khadafi). Estee brings a free spirit and an element of fun to the table, but make no mistake he takes his art quite seriously. This is a man born to rhyme, his elastic flow can wreck many different styles of production and he can write many different kinds of songs. His most frequent collaborators are his friends, and the music reflects that. When we spoke he was in a reflective mood, looking back on his European tour with Killah Priest and getting the chance to record an entire album with Tragedy, one of his favorite MC’s of all time.  I got the sense that he was very appreciate of his journey, but was equally excited about what the future holds as well.