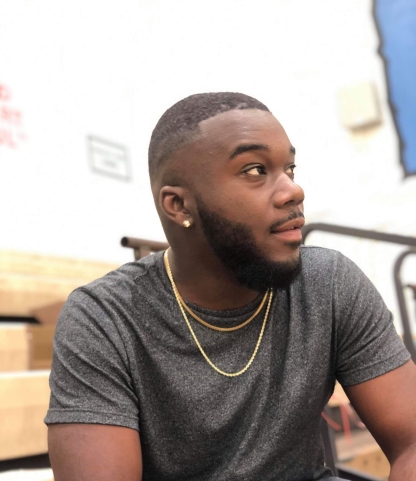 The Historian is an easy guy to root for. He is a young man that is aiming high with both his education and music. Last summer he delivered the spectacular Making History which featured a murderers row of talented emcees over his signature dusty loops. He is one of the kindest guests we’ve been in contact with, so much so we thought it would be cool to cop one of his works for the pod cast’s theme song. He will always be a part of the show’s DNA, and we are thankful for that.

RD: Some of your earliest productions are with Tha God Fahim, how did that relationship develop?

TH: I had just made a Twitter account with a whole lot of ‘type’ beats on my Youtube channel. I had confidence that I could make something dope and it was around my 17th birthday in 2017. I reached out to him through DM and before I knew it he was using the beats. It was a great feeling.

RD: Talk to us about Making History. What was the inspiration behind the guest list and sound of the project?

TH: My father had me listening to people like Alchemist at a young age. In the 7th grade I was listening to Durag Dynasty, Russian Roulette and Cutting Room Floor. So I had developed a taste of hearing a couple of heavy hitters on a single beat. So when I was doing Making History: Side A, all I knew was I wanted to get as many people on there as I could.

RD: It’s very rare to see projects released as a 1 track suite nowadays, what made you go in that direction?

TH: I gotta admit, that whole approach was inspired by my man Flashius Clayton. He was the first guy that put me on an actual project. The Good Fella EP, in fact. And this project was a suite, and I liked the idea of having one whole play through track, no cuts.

RD: What can listeners expect from Side B?

RD: You’re one of, if not our youngest guest on Respect Due. Are you happy with the progress you’ve made in such a short time?

TH: I absolutely am! Most people didn’t even know I was 18 to begin with, let alone 17 when I was first dropping songs. Here’s another fun fact, I’m still in high school and am the current ASB president and Valedictorian.

RD: Word is your handle is close to your heart, your quite the history buff. Is there a certain time period you find most interesting?

TH: Yes, absolutely. I was collecting history books, replica artifacts, posters, and journals two whole years before I became a producer. I love the 5th century of Francia. Google a picture of Clovis and tell me that ain’t dope.

TH: As far as mixing goes, I’ve only had to mix a few songs here and there. Usually the rappers are so awesome they already send the tracks mixed. I also love going to different people for album cover art. Lots of great artists out there.

RD: Any specific goals for 2019, or do you take each collab as they come?

TH: Well since I got school on my plate as well, I really just work with as many people as possible while I have time. I’ll be up late night producing and looking for skits the day an essay is due. I do have a lot of stuff coming that I cant talk about yet though!

RD: Give me one thing history taught you that you apply to your music.

TH: I apply all the ideals of Charlemagne to myself and music. Work with as many people as possible and hold true honest intentions. I don’t want enemies, just music. Charlemagne carrying these ideals made him the king of everything. Holy Roman emperor, King of Francia, King of the Lombards, and in relation, I find myself in cool connection with rappers.