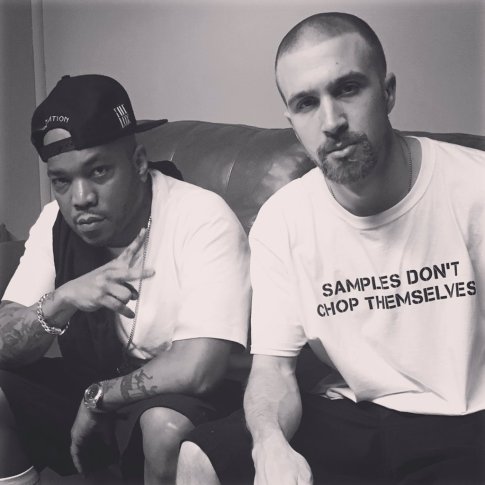 New York’s own Fortes is a busy man. You can usually catch him cranking out constant hours in the lab, writing rhymes and building his Classy Boys brand. A year removed from his official debut Shadow Of A Ghost, which boasts two features from mentor Styles P. we catch up on what to expect and how he got to this point.

RD: The first thing we think of regarding you is hard work. Your constantly posting beat videos and releasing new material. How many hours a day do you put in?

F: I usually put in a good 16 hours a day. I might be listening for half of that time and making beats with the rest. I’ve been doing that for about seven years now. Most musicians get four hours of sleep anyway and I operate just fine. I just want to be prolific as I can. Music releases dopamine and serotonin.

RD: Do you feel your work ethic gives you a competitive advantage, or is that just how you operate regardless?

F: I guess naturally it becomes a competitive advantage, but it’s just what works best for me. I make anywhere from 10-20 quality beats a day, and whatever I like best I usually record on or send it to an artist. I make a lot of music I just create for myself and simply have a lot of music that won’t see the light of day. One thing I always try to do is out-do myself. I just want to keep pushing the envelope forward.

RD: You have a very active working relationship with Styles, how did that come about?

F: I met Styles when I was 20 working at a liquor store. A sequence of crazy events occurred and he’s been my mentor and family ever since. It’s kind of surreal having your favorite rapper somehow become this close figure to you in your life. He has taught me many things and continues to inspire me. I’m thankful for him as a mentor and wouldn’t want anyone else to have that role in my career.

RD: One of your more noteworthy placements is That One for Casanova. I assume you had to go through management, or do you know him personally?

F: I actually got that opportunity through Taxstone. I met Taxstone for the second time at the D-Block studio and he heard I had beats so he took my number. When we first got into sessions with Casanova they were playing the first beat I played for hours. I remember Tax telling me initially I was the only producer he wanted to work with. I know we have some unreleased stuff that may never be heard but you never know. Much respect to Casanova and his well earned success.

RD: What is Classy Boys?

F: The Classy Boys is simply my brand for my supporters and creators. The Classy Boys mantra is “We Don’t Know What Yes Men Are”. Anybody who truly messes with the movement is a class act. The other member is @Smokebandz, a young producer with mad mystique and versatility. He is an artist as well, be on the lookout for him.

RD: You rhyme as well as produce. What came first? And do you always write to your own instrumentals?

F: I was an MC first, I use to rap everywhere I went. I’d  freestyle non-stop when I was around 13. Then I started recording on an 8-Track when I was 15 and bought myself a MPC. During this time I never stopped recording, but I got skilled at production around 20 years old. I’ll say it takes an amount of studying that I still do to become a great producer in my opinion. I’ll rap over any beat that inspires me but since I’m creating all day I end up recording to the rare instrumentals I make.

RD: Let’s talk about your project Shadow of A Ghost. How long did it take to complete? Are you happy with the feedback you’ve gotten thus far?

F: I’m more than happy with the feedback I got, even if it touched a few souls then it is golden and some people have said really nice things. I simply just wanted to make a beautiful album that you could listen to, and also have the ability to listen to all of the production after you heard it.

I was in LA for a few months and I created and cohesively chose ten beats out of 5000 for an album that turned out to be my debut album Shadow Of A Ghost. As soon as I got back to New York, I finished the album in about two weeks. I listened to it for the next year and released it. I was blessed to have Styles P, who I was paying homage to in a song like Mentor feature on two tracks. I pressed the vinyl myself with the instrumentals included on B side and released it entirely independently. It was a crazy feeling as a musician holding a piece of art that you created in the physical form for the first time. I’ll be re-releasing vinyl of Shadow Of A Ghost soon.

RD: Plans for the rest of the year?

F: Producing EPs and songs for a bunch of people. Preparing my sophomore album, more instrumental albums, living a healthy lifestyle and enjoying my life and loved ones.

Editors Note: Since we did this interview Fortes and Lord Juco joined forces for the Lord Classy EP, Bandcamp link can be found below.

RD: What is your ultimate goal as an artist, on both the production end as well as an emcee?

F: I just want to be known as the greatest sample based producer of all time. I will always rap whenever the spirit hits me. I simply to be recognized and respected by my peers and supporters. I never want too much attention or sought fame so I am just happy to inspire and help through my music. I shall continue to create as much content as I can while I am living and I can’t wait for the world to enjoy in due time.