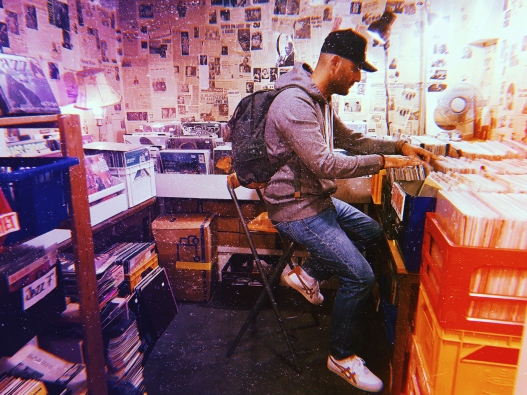 Producers like J.O.D. help our musical world expand, adding to the international base of talent with smoothed out beats that touch the soul. I first heard him on Smoovth’s SS96J album, and he happened to produce the cult favorite of the project, the haunting ‘Ouija’. As the years have gone on he has produced for Planet Asia, All Hail Y.T., SageInfinite and Left Lane Didon. With his resume always expanding, he is not letting his foot off the pedal. Here’s what he had to say for himself

RD: Your introduction to many listeners was “Ouija’, from SmooVth’s SS96J album, one of the standout tracks on the album. Would you consider that your first major placement?

J: That record was very important to me, it made me focus more on production and beat making, especially after Alchemist tweeted about it, that made me understand that I was on the right path, doing things the right way and that I had to believe in my beats. The original version of the joint I gave to SmooVth is slightly different from the one that was released, they had this visionary idea of looping just a small section of the beat where the drums are filtered out. At first I wasn’t 100% sure about it, with time I understood it was hypnotic and different. With SmooVth we have the idea of releasing the OG version as a Remix with some new features. The record I consider my first placement is Verbal Kent’s “September”, on his Anesthesia album from 2015.

RD:Give us a little background on yourself, how long have you been making music, and what is your musical history, did you play any instruments?.

J: I was born and raised in a seaside city in the south of Italy called Pescara. I don’t recall specifically when but I remember approaching Hip Hop at a young age, I used to dress with baggy jeans and loved graffiti, even if I had to discover rap music yet. A pivotal moment was my brother bringing home Puff Daddy’s “No Way Out”. It was 1997 and I was 9, that’s definitely when I started to be heavily into hip hop music. I played guitar for several years, but I’d love to learn to play drums. At first I was an MC I recorded songs and mixtapes for years before I finally understood that my true identity was in beat making. I come from a family where music has always been very present, my brother plays the piano and my dad is a double bass player and avid jazz fan. He bought my first drum machine, a Yamaha RX120, when I was still a little kid.

RD: You were able to land a placement on Planet Asia’s Mansa Musa album. That had to be very rewarding.

J: Yes, it was a big accomplishment. Planet Asia is a legendary artist and, as a long time fan, it was an honor being able to collaborate on a song with him. I was heavily into Durag Dynasty when I made that beat so when it was done, I immediately thought about his voice and flow and I tried to reach out. I sent him 3 joints and he got back saying that he would use one for sure. The fact that it was the first single from the album was also a big deal.

RD: After those works, you were able to lock in with some very talented MC’s for full projects. Break down the making on the Back Doe Lil Joe album with Left Lane Didon.
J: To me Left Lane Didon is one of the best and most original MCs right now.I reached out to him after I heard “AC Massacre” with Jay NiCE and Conway. Initially we wanted to release just a couple of songs but after I sent him a few beats we basically had the album. I’m really grateful to Lefty because he also put some other incredible artists on my beats, like Benny, Guilty Simpson, Tha God Fahim and he also introduced me to Jay NiCE, Chris
Skillz and All Hail Y.T.. The album has a really laid back summer vibe, but it wasn’t something we aimed for, it came out that way very organically.

RD: Shortly after you released the Onda EP, with appearances current favorites Left Lane/All Hail YT and SageInfinite. What led you to choose them for the features? And do you plan on doing another this year?

J: That EP was made very quickly, I wanted to put out something with a lighter sound compared to what I had release to that point. I chose them because I wanted to keep collaborating with them and because I knew they would be a perfect fit for the vibe I had in mind. Traum Diggz and Chris Skillz are also in the project. Right now I don’t have plans about a new solo project but now that you made me think about it I’ll definitely keep it in mind!

RD: After that came Blessed Are the Damned with another Delaware resident, Chris Skillz. Can you talk about making that project, and your thoughts on the growing Delaware scene?

J: Like I said, my relationship with Chris Skillz started with Back Doe Lil Joe. He told me he liked my beats and I basically told him that if he wanted I was down to do our own project. We started pretty soon and I think we did the whole thing in around a month or so. I really enjoyed working with Chris, we have great chemistry and we listen to a lot of the same stuff so beats and lyrics came out with no effort. We tried to reach out to a few labels to print the album, hopefully we’ll find the right place for it in the future. “A Feast Of Friends” is one of my favorite tracks. I’ve never been in Delaware but I’m really curious about the secret of so many talented artists. Maybe is the weather or the ocean, I don’t know. It’s incredible that those guys, Left Lane Didon, All Hail Y.T., Chris Skillz, Jay NiCE are all from there.

RD: Your second project with Creep Giuliano just dropped, and it’s getting the wax treatment from Tuff Kong Records. How rewarding is it to see a project of yours getting pressed up?

J: Creep Giuliano is an Italian MC from Firenze, we’ve been working together for a couple of years now. He was a fan of the sound I was using the artists we talked about and he wanted to do that in Italy. The album did great and we had the chance to work with Tuff Kong Records so it’s a 100% Italian project! Seeing you album in a record store on in somebody’s collection is always rewarding, probably the biggest accomplishment for an artist. Kudos to Cuns and Domenico from Tuff Kong for believing in the project.

RD: The most recent placements for you are two bangers on Chong Wizard’s Soul Stone EP. This has been a very successful run of releases from him, did you make the beats with a superhero theme in mind?

J: I was introduced to Chong Wizard by Ceasar, a fellow Italian producer based in Los Angeles. I sent Chong a batch of beats and he got back immediately saying that he liked what he heard and that he was using two of them. I’m really happy with the records and with the artists Chong picked, M.A.V., Rigz, Teller Bank$, Pro Zay, Sekwense, all incredibly talented artists. I didn’t really make the beats with a superhero theme in mind, I was mostly focused on giving him something that would be fitting with the project.

RD: If you could release a production album with any 5 living rappers, who would they

RD: Shouts, plugs for upcoming projects? J: I have an EP with SageInfinite coming very soon and one with All Hail Y.T., an album with Junelyfe, one with Jay NiCE and one with SmooVth. Besides these I have a couple of placements on albums I can’t talk about officially yet. A S/O to everybody I mentioned in this interview and to all the producers that are making good music.

Blessed Are The Damned https://chrisskillz.bandcamp.com/album/blessed-are-the-damned