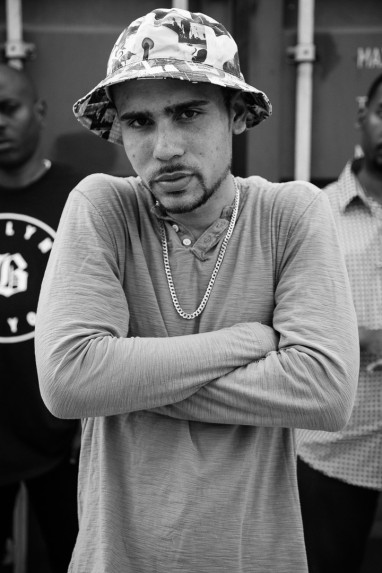 RD: For those unfamiliar, how would you describe yourself as an artist?

NC: I’m a hip hop artist from Kingston, Jamaica now residing in the states, New York to be exact. How I got my name is pretty simple because my real name is Damon, so I switched it backwards and got “Nomad” then I added my middle name “Carlos” to it. The word Nomad also fits my personality because I’ve never felt any real attachment to the places I’ve lived outside of yard in my 20’s. My music has always been labelled as “90s hip hop” back home in yard, I never really liked that term although I fell in love with the music of that era. I feel it’s a natural progression of the sound. Some call it Boom Bap, underground or even the term “real hip hop”. I was never really big on these terms, but I guess my music does fall into those categories of hip hop. I consider myself an MC bringing you that type of raw sound with an unusual perspective in my lyrics because of my upbringing and the environment I’m from.

RD: Did you grow up in Jamaica? When did you gravitate towards hip hop, and who were some of your earliest influences?

NC: Yes I grew up in Jamaica. I was born in Florida and my parents moved back to Jamaica when I was 5. Jamaica is my home. My mom was a music fiend and once a month we would go to the record shop in Half Way Tree, Kingston and she would allow me to get one CD. The first hip hop album I ever bought was Busta Rhymes When Disaster Strikes in 97, and I was barely 10 years old. You know Busta had that type of animated vibes us yardies tend to gravitate to. My cousins who were older than me were into hip hop as well, and I used to always listen to music with them watching them rap and be in awe. They were back & forth from Jamaica, and America too so when I started getting deeper into hip hop it was through them. I was definitely into BIG and the Bad Boy era from early out but the older I got I started getting more into Nas, Bone Thugs, Mobb, Wu, and Pun just to name a few. I started checking these guys out mostly when they were on their 2nd and 3rd albums then I had to back track the catalogs. When you ask about influences those names come to mind. Naturally I listened to a lot of dance hall growing up, and even that helped develop my style in a unique way.

RD: Would you consider Me Against the Grain your official debut?

NC: Not at all. I’ve been doing this as far back as 2009. There weren’t too many opportunities for rappers in Jamaica. I had released an album locally in Kingston back then called Fuel to the Fire which was never released publicly. That project was where I gained my respect as an emcee in the community. I made CD’s for the streets and would distribute it that way. After that I had done a mix tape rapping mostly on industry beats called Live From Yard. I wanna say these times I was still honing my skills and trying to figure out the sound I wanted to settle on. Musically I don’t think I fit into what was popular in Jamaica at the time so I found myself trying to cater to that audience. Then I did Me Against The Grain afterwards which was in 2012. Around that time I played a part in propelling the hip hop community to its ceiling in the local music industry. We started putting on shows for the community and ultimately built our buzz as artists while giving others the platform to do they thing.

RD: Your Bandcamp contains a number of releases, if you were to pick one to introduce someone to your material which one would you go with?

NC:  I feel like I would start with Cipher. Mentally I feel I’ve been in a great space since then musically. I set my own expectations and it helped me gain a new audience.

RD: You teamed up with one of the scenes’ finest producers in Farma Beats on your Cipher project. Talk to us about working with him and how that project came to be.

NC: Well, I think Farma is one of the best in the game. I came across his work online and thought it was flames. Reached out on the DM and we went back and forth for a while. I’d share some of my music and he was feeling it. We worked on Leviathan Axe and it was dope. I was in a comfortable zone and so we ended up just making an EP out of it.

RD: Blxvk Desert is the latest offering, how does this differ from some of your other recent drops?

NC: Blxvk Desert has a more yard focus lyrically. I linked up with Inztinkz on that. Inztinkz is the producer for our crew The Council Of The Gods. We are all from Jamaica and he still lives out there. Anytime we link up this is the vibe we on. So there’s a lot of Jamaican references and lingo all over that. I was able to pull from how we used to live in yard and display that lifestyle. Get personal here and there with some experiences. It’s my favorite project thus far.

RD: Do you approach each project with a certain mindset (number of songs/concepts) or does that change during the creation process?

NC: My mindset is always to just make quality. Meaning just stick with what’s working for me in terms of my style and sound. As for concepts, I’m into a lot of shit so my mind is always thinking creative. I watch a lot of movies and play video games too whenever I have time. All that stuff is part of my process. I’ll have crazy ideas and be jotting them down. For now I’ve been just dropping EP’s short projects because I want people to get used to what I have to offer in small doses. I don’t think they ready for a full album yet. That’s been my mindset from 2019 going into this year but I’m working on a baby tho, a full length LP that one day I plan to present. Don’t really wanna talk about that one yet.

RD: What are some plans you can reveal about 2020?

NC: Dropping more work of course, and also finishing up some collaboration projects I’ve been working on for a while. I’m in the process of finishing up an EP with Artivist. I plan on doing more features too. Got a show booked for February, and I definitely want to work on doing more shows. So I’m looking forward to that.

NC: Big ups to y’all for this interview. Big ups to The Council of The Gods and the whole movement in yard. Bless up all blogs and radio jocks who support the music. And big up all the fans who buying and streaming the music. Y’all really the motivation to keep going and staying the path on this musical journey. Bless